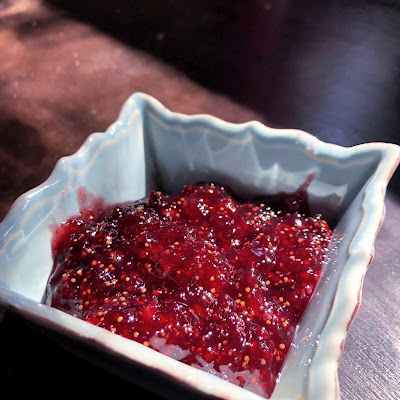 First off- to properly say the title of this post, one must imagine onself as Lucifer, the main character in the show of the same name, replacing the word "detective" with "figs." The phrase should roll off your tongue with the words rolling together, be spoken in a British accent, and leave anyone looking at this fig jam incredibly anxious to dip in a spreader, find a piece of manchego and have at it. Lucifer is my new guilty pleasure that has me laughing out loud, wanting to crack open a Bible to read about the angels, and thankful for the connections I have to the people around me.
Back to the figs......I'm typically a fig flavored balsamic vinegar type of girl, but figs seem to be at the peak of season so I needed to experiment. NY Times Cooking has a recipe for a fig jam, by Martha Rose Shulman, which looked delicious. Roaming through the farmer's market a couple of weeks ago as the last of the berries were on display, I was remineded that it's been a long time since I've made any kind of home made fruit butters, jams or spreads.
I like small batch recipes because they don't require all the materials and prep of large batch canning. The recipe looked easy enough and not like something that would require me to be eating fig jam until Christmas. Although.... if I ration it, it might just last that long. And that's not a bad thing.
Manchego cheese is a best friend of mine, and pairs lovely with fig. The two were quite delicious together. I made the jam for an end of summer porch party I was hosting, and for the first time in a while, I was feeling inspired by the love of cooking for others, trying something new, and truly enojoying a gathering with friends.
Sam Sifton said something last week in his "Cook for Those Around You" letter that struck me. In speaking about remote work, in-person work, getting kids back to school, and acknowledging that things may not be as they were, or as we think they should be, he reminded his readers to be kind.
There may be convenience in working remotely, but there's also isolation. There is risk in working with or around others, but you are not alone. At the end, he says, "Cook for people. I know it helps, even if you don't start out wanting to do it, I promise."
Kindness shows itself in many ways, cooking is just one of them. So if you can still find fresh figs at a farmer's market, grab some and make this recipe. I added about a 2" piece of ginger (cut into matchsticks) to give it a little kick, dropped the sugar by about 1/3 of a cup, and used an imersion blender to break up the pieces of fig. You should be able to fill (3) 4oz. jars; keep one for your next gathering with friends and give the other two away. You'll be happy you did.
Email Post
Labels: figs Lucifer manchego Martha Rose Shulman Netflix New York Times NY Times Cooking Sam Sifton TMac