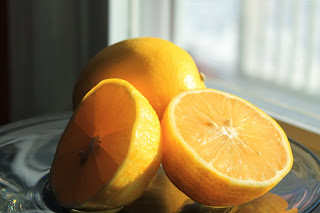 My mother arrived at my house on Christmas Eve bearing gifts-- several of them. They were yellow, large, round and four of them easily overflowed between her two hands: Meyer Lemons; hand delivered from Georgia! A cross between a lemon and lime, they are sweeter than a typical lemon, have a thinner skin, and are in season right now! Lucky for me.
So I put the lemons in my fruit bowl and waited for them to finish ripening. Fine by me, I had no idea of what to do with them.
Last year, I made a Meyer Lemon and Salted Caramel ice cream which was delicious. Making the same thing twice can be boring though, and I really needed to find a way to use these guys before they got too ripe and went the way of warmer days.
Some searching led me to a recipe for Lemon Sorbet from Cook's Illustrated-- my favorite source for recipes. But, me being me, I couldn't just leave the recipe the way it was, I had to make adjustments to allow for incorporating the three oranges on my counter that I neglected to use on New Year's Eve with our chocolate fondue.

So.. two zests and some cinnamon later, I made a lemon, little bit o' orange and cinnamon sorbet. It tastes delicious, was really easy and captures that citrusy cinnamon flavor of winter. 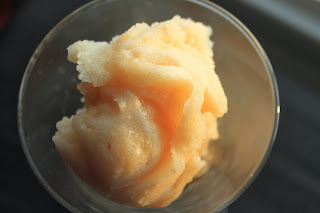 It needs a name as bright and spicy as its blend of flavors. Somehow, it needs to capture the Meyer Lemon specialness that makes it great for this time of year. Winter is citrus season, but two years ago I created a Winter Citrus Chicken recipe so Winter Citrus Sorbet is out.


HELP!!!!
Bloggy buddies and foodies and anyone who appreciates sending their kids into the snow so they can play in the kitchen, share your idea for a name in the comments and I'll pick a winner. The prize? Not sure yet, but definitely the recipe and credit for helping me with my naming dilemma.
Email Post
Labels: Christmas Citrus Fruit Contest Cooks Illustrated Home Made Ice Cream Meyer Lemon Recipe Sorbet Recipes