Dear Mom and Dad,
Remember when Valerie Seeley was new in the neighborhood (I can't even remember where she lived) and the family she was living with was moving back to Antigua (or something like that) and I begged for her to be able to stay and live with us? And remember when I came home from Switzerland after the Caux program and asked if Wolfgang could stay with us during part of his visit to America? A friend of mine, or maybe it was some personality test, said that I was a "fixer." I liked to fix things. I like to think of that as more of a helper. In those situations at least, there was no fixing, just helping a friend.  Well, I'm back at it again. Maybe I should have been a nurse, or my other favorite fantasy profession, an engineer. But, I digress. Back to helping. Mom, as a history major, you'll really appreciate this, I think.
My book coach, Anna Olswanger, had a children's book published last year called Greenhorn. Not sure what a greenhorn is? Neither was I. 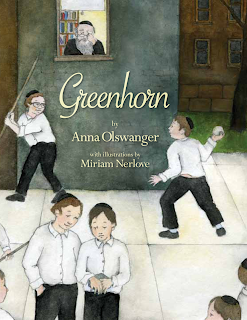 Greenhorn: n., an inexperienced person, a novice, beginner or newcomer, according to Wiktionary.com.

In 1946 Daniel was an orphaned holocaust survivor who was sent to yeshiva (an elementary school where students learn both Jewish and secular subjects) in Brooklyn, NY. His sole possession, a small silver tin, is also his only link to life before Brooklyn. Daniel doesn’t speak English, knows no American customs, and has no family but embarks on a life journey where he learns of friendship and trust. Aaron, his first friend, stutters his way through defending the Greenhorn who has joined the school. What’s in the tin? Why is it so important? How does it connect Daniel to the life he fled?

These questions, and the miracle of hope, are explored in the book, Greenhorn, by Anna Olswanger. Based on the true story as told by Rabbi Rafael Grossman, portrayed by Aaron in the book, it is one which like so many others will eventually only be able to be told through books and movies. Olswanger first heard this story from Rabbi Grossman more than 30 years ago while on a family trip to Israel with her synagogue. Touching and true, she felt it was “important and wanted to write it so the story would live on
The tin, and more importantly the secret object inside it, are also a source of history. According to Anna, post-World War II many Jews believed the Nazis mass produced soap made from human fat. While not a Holocaust expert, her research found that the Stutthof concentration camp near Danzig/Gdansk, did experiment with making soap from human fat. Inside Daniel’s tin is a small bar of soap, described as sticky and greasy. When the box is stolen and the soap is discovered, Daniel’s attachment to it is revealed, “Maybe fat from mama in soap. Maybe fat from papa . . .,” Daniel says in the story.

Here's the cool part about the book and Anna's project:

Greenhorn’s story of friendship, hope, and a bit of history is one that Anna is currently looking to share with a much broader audience. Her goal, along with screenwriter Ree Howell and director Tom Whitus, is to develop the book into a 40 minute independent film to be submitted ultimately, for an Academy Award. Tom Whitus believes that making it into a film will help reach a broader audience “in a way a book cannot.”  “The point of the book,” Anna said, “is friendship. Aloneness. One object connecting [Daniel] to a lost family and human beings connecting with each other.” There is an information page for the film which of course gives more technical information than I can put in your letter. They are trying to raise $18,000 to produce the film.
As a lover of art and independent films, I knew you'd love this Mom. It's a very cool story on several levels. Feel free to spread the word and I don't know about you, but I'm looking forward to seeing this at the Clairidge one day. I'll write more later.

Tracy
This summer I'm writing letters from camp to my parents as a fun way to share with them what's happening in my life. Who would you write a letter to?