I Is For Ice Box Cake 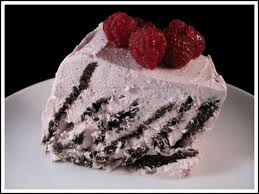 I made an icebox cake a few years ago and brought it to a friend's house for dessert on New Year's Eve. As we entered the house, my friend's husband stopped me.

I could tell that this little dessert was invoking memories. I had my own memories too. This was one of those staple desserts that my mom used to make for dinner parties, and if it wasn't an ice box cake, it was an apple pie. Simple but delicious. And by the way, great the next morning for breakfast too.
Sadly, I don't have a picture of the ones I've made in the past or the one I made earlier this winter for a holiday party (which I made with peppermint and green food coloring) but that was delicious. If you're up for either an adventure or a memory, here's the recipe:

What's Next:
Place cream in a large bowl.
With a hand mixer, beat at high speed until the cream begins to thicken. Slowly add vanilla and powdered sugar. Test for sweetness and keep beating until fully stiff and it looks like whipped cream; which is exactly what you are making.
Next, take a chocolate wafer and place a spoonful of whipped cream on it. Place another wafer on top of whipped cream. Place whipped cream on top of that wafer and then another wafer. Continue alternating and stacking, and when you get to about 7-8 wafers, you can lay this down on it's side and keep going. (You'll want a long rectangular platter).
When all of the wafers are done (or as many as you want to use) spread the remaining whipped cream over the top and around the sides of your stacked wafers.
Place in the refrigerator for 24 hours. The whipped cream softens the chocolate wafers and you end up with a chocolate/vanilla layered piece of deliciousness.
To serve: cut slices sideways so it looks like zebra stripes.

My A to Z posts are themed with food, parenting and life, but not necessarily in that order. Enjoy!
Email Post
Labels: A to Z Challenge Food Ice Box Cake Recipes Tracy Bermeo