Whew! I made it- well almost. The week isn't over yet, but I'm almost there. I survived Valentine's Day (75 Valentines for three kids), the 100th Day of school, Mardi Gras (which involved breaking out my sewing machine for my daughter) and my first Blog Hop.  Valentine's Day was my 2 year anniversary writing the Crock It! recipes for MyVeronaNJ and as much as I wanted to write something about Valentine's Day or the two year anniversary, none of that happened. What's still to go? A Perfect Picture Book post for Friday and attending the "Rap of the Presidents" on Friday morning where my daughter will be rapping and doing cartwheels in honor of Presidents Day.
And in the midst of it all, I was given then Kreative Blogger Award, all thanks to Jenny Young over at Castles in the Sky. Thanks Jen! Head on over to her blog and make a visit. 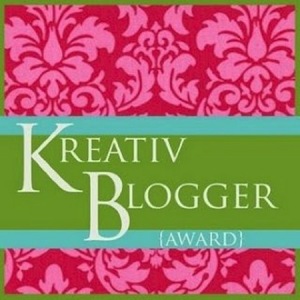 So, receiving the Kreativ Blogger award means I have a few things to share with you all:

1. Name your favorite song:
You Get What You Give (New Radicals)
2. Name your favorite dessert:
Creme Brulee (the worst one I had was in Paris- go figure)
3. What ticks me off:
Slow drivers (really? who has that much time?)
4. When I’m upset I:
Play out what I feel and would say through music (singing out loud in the car by myself)
5. What’s your favourite pet:
Our dog, KT (named after the subway stop in Brooklyn where she was found)
6. Black or white:
Black (stains don't show as much)
7. Biggest Fear:
Forgetting one of my kids (I have 3)
8. Everyday attitude:
General Happiness (it takes a lot to make me angry)
9. What is perfection:
Knowing who you are and what you're meant to be (totally not there)
10. Guilty Pleasure:
Apple pie for breakfast (YUM!)

7 Random Things About Me:
My favorite color is blue
I need to read in order to fall asleep
I love roasting marshmallows
I love watching a thunderstorm from my front porch
I am a self-proclaimed workaholic
Cinnamon milkshake from Smashburger- my new favorite food
I was lost until I started writing
Email Post
Labels: Crock It Jennifer Lee Young Kreativ Blogger MyVeronaNJ Valentine's Day Blog Hop