Dear Mom and Dad,
You should have seen us for these couple of life changing days!
I walked out the front door toward the driveway one morning and almost jumped when I caught a very fluffy baby bird sitting in the rain gutter out of the corner of my eye. I  jumped (you know how I feel about birds) realized it wouldn't hurt me and kept going to the car. I didn't tell the kids about it because I thought for sure the boys would race over to it and want to hold it, feed it, pet it, and bring it inside to keep with the stuffed animals. 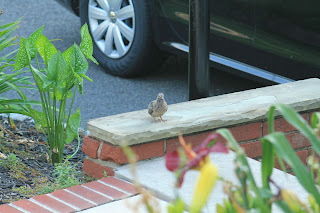 We were in and out all day and then finally home by about 4. The bird managed to move itself from sun to shade throughout the day. He (we just started to call it a he) seemed healthy, was able to move his head, hop around and his wings seemed to be sitting exactly where they should have been on his body. By 5:30 I went to my neighbor's house as she is the expert on helping lost animals. We discussed feeding it, getting a box for it for the night, taking it to a shelter, everything but leaving it up to nature and waiting for the parents to show. Finally the guy at Petco helped me.  "Just Google it and see what comes up," he said, much more calmly than I felt. Why didn't I think of that? Oh right, I was panicking.

I Googled (a few years ago, that wasn't even a word). It turned out that this was a fledgling and most likely in the process of learning to fly with his parents close by and watching. Not 5 minutes after my research, Momma bird showed up and fed Baby bird. Then (and this was amazing) she coaxed the baby bird to fly up to the top of the railing by the stairs, so it would be safe for the night. Ok, so the bird could fly, but not very far and yes, the parents were close by. Apparently, they were just as worried as I was about creatures wanting a little Dove for dinner during the night. 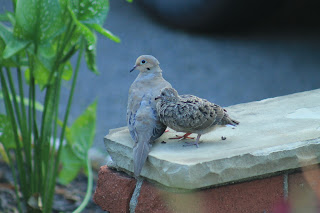 Over the course of the next day, we watched Baby bird closely and listened for the parents. The kids were as glued to the windows as I was and we all took on new walking patterns so as to not disturb Baby bird. The parents showed up in the afternoon and were everywhere from my roof to the walkway. Night was approaching and as much as we wanted to help, it would have been worse for the baby. 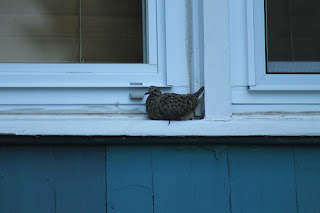 As a mother, I have never felt quite so helpless (except during wrestling meets). As an observer of nature, I felt ever so grateful to see, in person, how much they resemble people. The Baby bird has been back just once; I think he feels comfortable in our flower beds, and flying here from the tree.  And now, when I hear the doves from the wires and trees around our house, it just sounds different.

So I have to ask: did P.D. Eastman witness something similar before writing Are You My Mother? I should look that up.

Sadly, summer ends soon, and so will my Letters From Camp. If you could write to someone who would it be?
Email Post
Labels: Are You My Mother Doves P.D. Eastman Parenting What To Do If You Find A Baby Bird